In my last post, we covered chapters 1-5. Today, we will cover chapters 6-9 which are the remaining chapters of this week’s reading.

Mrs. Dean continues her narrative. Hindley came back for the funeral and brought a wife with him. Mrs. Dean described the wife as being delighted with all that she saw except the preparations for the burial and all the mourners. She thought the wife acted silly in that situation. The wife took kindly to Cathy but soon her affections began to wane. And then Hindley became tyrannical. He ended up turning on Heathcliff again, deprived him of instructions from the curate, and made him labor out of doors. This was degrading to Heathcliff but he bore it fairly well at the start. This was only because Cathy taught him things and played with him outside. Hindley didn’t usually know about their romping about; but when the curate told him of their absences in church, he punished them both.

“But it was one of their chief amusements to run away to the moors in the morning and remain there all day, and the after punishment grew a mere thing to laugh at.” (p. 45)

One day, Heathcliff and Cathy weren’t home. Hindley had the doors barred and determined that they would have to stay out all night. Nelly (Mrs. Dean) kept watching for them from the window and finally Heathcliff showed up; but without Cathy. He explained what happened. He and Cathy took to spying in on the Linton family at Thrushcross Grange. But as they were running away from the house, the Linton’s bull-dog caught hold of Cathy’s ankle. The Lintons brought her into the house and Heathcliff followed. He was cursing up a storm until finally they put him out and told him to go on. He didn’t though initially. He watched in to keep an eye on Cathy. They tended to her ankle, brought her food, and she was doing just fine. So Heathcliff headed back home. Nelly warned Heathcliff that this incident would set Hindley off. In this chapter (and indeed in other parts of the novel), we see an example of the gothic element of strong emotions. We also see another appearance of a mean dog:  “‘They have let the bull-dog loose, and he holds me!’ The devil had seized her ankle, Nelly:  I heard his abominable snorting.’” (p. 48)

Wood engraving by Claire Leighton which was among other illustrations she made for a 1930s American illustrated edition of Wuthering Heights.

Mrs. Dean continues her narrative. Catherine ended up spending five weeks at the Grange. While there, Mrs. Linton helped her improve her manners and bestowed upon her fine clothes and such to make her more respectful and ladylike. Catherine took to this well and returned to Wuthering Heights more refined than when she left.  When Catherine returned, Hindley told Heathcliff he could greet her like the other servants and that made Heathcliff mad. Catherine noticed how dirty Heathcliff was, for she had grown accustomed to how the Linton children were. This hurt Heathcliff. The next day the Linton’s were to come for dinner. So Nelly helped Heathcliff clean up and get prepared. However, Mrs. Linton has allowed her children to come to dinner only if Heathcliff is kept away from them. So Hindley had him sent to the attic until dinner was over. However, before he headed to the attic, the Linton boy made a comment about Heathcliff’s hair. That made Heathcliff so mad that he flung hot applesauce on the Linton boy. After dinner, Catherine went to see Heathcliff in the attic. Nelly ended up letting Heathcliff out and gave him dinner in the kitchen. Heathcliff told Nelly that he planned to get revenge on Hindley. At this point, Nelly stops her narrative and apologizes for going on and on. Lockwood encourages her to keep telling him the story and she ends up picking back up with the summer of 1778.

Mrs. Dean continues her narrative. It is now 1778, which is just 23 years before Lockwood has come to the Grange. Hindley’s wife gave birth to a baby boy whom they named Hareton. Not long afterward, Hindley’s wife died. Nelly was given the task of raising the baby. Hindley took no interest in the boy and began to drink more and became a tyrant. He was especially abusive towards Heathcliff. Heathcliff, though, enjoyed seeing Hindley’s decline. Catherine began to be more of a dual person. She continued behaving politely and mannerly around the Lintons; but when she was home and around Heathcliff, she was her unruly self. Heathcliff, on the other hand, was becoming more sullen. He was now 16 years old. “…he continued to convey an impression of inward and outward repulsiveness that his present aspect retains no traces of. In the first place, he had by that time lost the benefit of his early education:  continual hard work, begun soon and concluded late, had extinguished any curiosity he once possessed in pursuit of knowledge, and any love for books or learning.” (p. 66)

Nelly’s narrative continues. She was trying to get Hareton hid and in walked Hindley. He grabbed Hareton and accidentally dropped him over the banister. (Hindley was drunk.) Thankfully, Heathcliff showed up in the nick of time and caught Hareton. A sidenote:  Even the ballad Nelly sang to little Hareton was very grim and gloomy. A few of the lyrics are found on p. 75:

“It was far in the night, and the bairnies grat, The mither beneath the mools heard that,”

This is from a ballad called The Ghaist’s Warning. According to Wikipedia, “The Ghaist’s Warning is a Scottish ballad based on Robert Jamieson’s translation of the Danish ballad Svend Dyring. It was published by Sir Walter Scott in the notes to The Lady of the Lake in 1810. Scott describes the ballad as being written not in the common language of the time, but in the “old Scottish idiom” such as to produce a more literal translation. The ballad describes a group of children who are abused by their evil stepmother after the death of their biological mother; the dead mother then rises from the grave to warn against their mistreatment. The Saturday Review praised Svend Dyring, arguing that the ballad, “with its combination of intense pathos and high imaginative power, stands alone, we are inclined to think, in the ballad-literature of Europe.” (Source) Here is a rendition of the Danish ballad Svend Dyring. Back to the novel…. Nelly now fast forwards to that evening. Catherine came in the kitchen and confided in Nelly. She told her that Edgar Linton had asked her to marry him and she wanted to know what Nelly thought. In the end, she told Nelly that she had already accepted and then launched into a discourse on why she can’t marry Heathcliff and revealed her thinking regarding marrying Edgar. All the while, Heathcliff was listening in on this conversation but Catherine didn’t know it. Catherine told Nelly that it would be a degradation for her to marry Heathcliff at this point. And thus, Heathcliff should never know how she loved him. She explained the difference between her feelings for Heathcliff and Edgar. She says:  “‘…so he shall never know how I love him:  and that, not because he’s handsome, Nelly, but because he’s more myself than I am. Whatever our souls are made of, his and mine are the same; and Linton’s is as different as a moonbeam from lightning, or frost from fire.’” (p. 79) Heathcliff didn’t remain to hear past Catherine saying it would be a degradation to marry him. He left. And he didn’t hear the rest of what Catherine had to say. Catherine went on to reveal what were her motives for marrying Edgar in regards to Heathcliff. “‘…but did it never strike you that if Heathcliff and I married, we should be beggars? whereas, if I marry Linton I can aid Heathcliff to rise, and place him out of my brother’s power.’” (p.80) Heathcliff ran away from Wuthering Heights and Catherine was beside herself. She ended up staying outside in the rain and got soaked through. She ended up developing a fever and was very sick. The Lintons took her to Thrushcross Grange to help her recuperate and Cathy got better. Unfortunately, Mr. and Mrs. Linton got sick and died. Three years later, Catherine married Edgar. Catherine wanted Nelly to move to Thrushcross Grange but she didn’t want to. She certainly didn’t want to leave Hareton. In the end, Catherine got her way. Hindley ordered Nelly to pack up. He said that Hareton would be taken in hand by the curate. Nelly had no choice but to do as she was ordered. At that point in the narrative, Nelly looks at the time and determines not to remain any longer but to go to bed. So they both (Nelly and Lockwood) retire for the night. 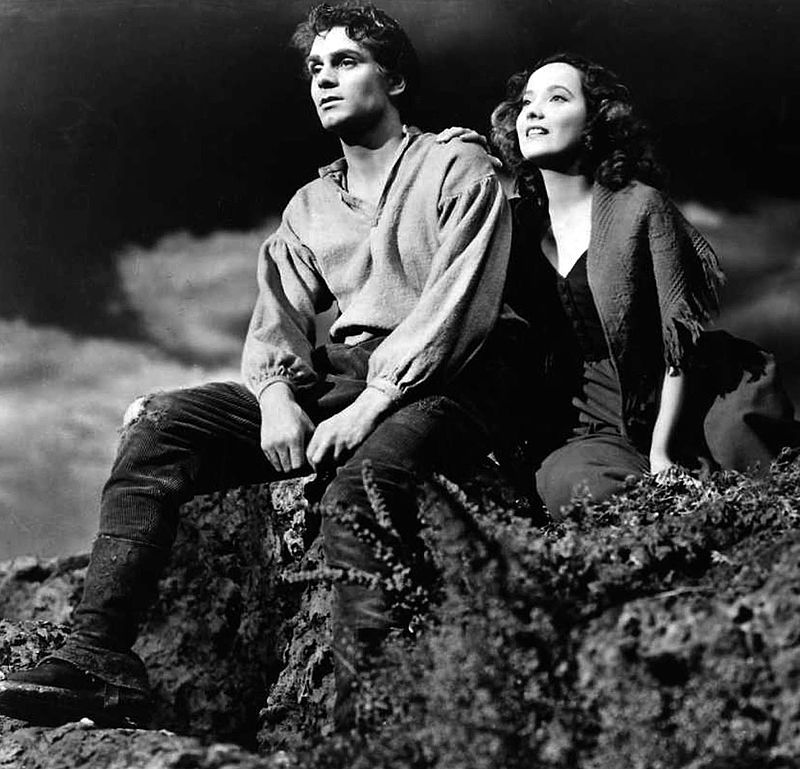 Let’s take a moment and think about Catherine’s speech on p. 80. Let’s look at the last full paragraph of her speech:

“‘…My great miseries in this world have been Heathcliff’s miseries, and I watched and felt each from the beginning: my great thought in living is himself. If all else perished, and he remained, I should still continue to be; and if all else remained, and he were annihilated, the universe would turn to a mighty stranger: I should not seem a part of it.—My love for Linton is like the foliage in the woods: time will change it, I’m well aware, as winter changes the trees. My love for Heathcliff resembles the eternal rocks beneath: a source of little visible delight, but necessary. Nelly, I am Heathcliff! He’s always, always in my mind: not as a pleasure, any more than I am always a pleasure to myself, but as my own being. So don’t talk of our separation again: it is impracticable; and—’” (p. 80)

What do you think Catherine means by this whole speech, especially her saying “I am Heathcliff!”? Let’s discuss this in the comments. And be sure to also share your thoughts and comments on this week’s entire reading of chapters 1-9!

Hi there! My name is Karen and I'm so glad you stopped by! Welcome to my blog!

We've got some great books lined up for this summer in the Modern Mrs. Darcy Book Club! (@mmdbookclub) And BONUS - these are all in the MMD Summer Reading Guide! 🙌 (#mmdsummerreadingguide)
*Book Review*
*Summer Reading*
*Book Review*
*Book Review*
I thought I'd take a few moments and share what I'm currently reading. I've adorned my bookstack with one of my favorite coffee mugs and a few cookies. 😁

You can try the search box below, take a look through the archives, or browse the categories.